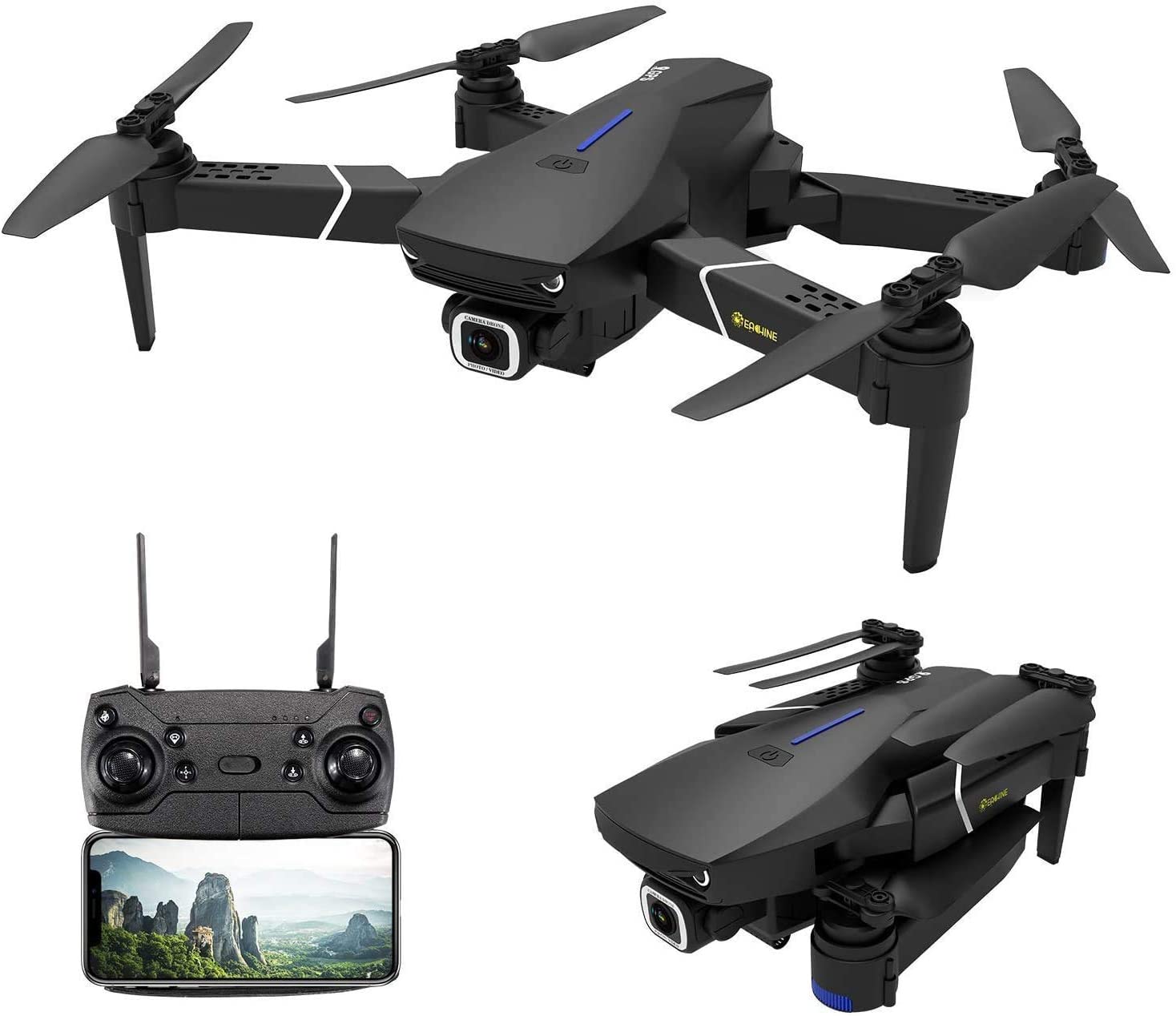 The Eachine E520S is ridiculously cheap! However, it will surprise you with the wealth of high-performance features it carries on its minute frame. This drone will not only give rookie pilots an unforgettable flying experience but experienced users will also start to appreciate the current diversity of cheap mini quads!

When it comes to drones, the race to produce cheap drones is getting tighter and tighter by the day. You won’t believe how cheaply some manufacturers are pricing their mini quadcopters these days! While this may be music to the ears of the bargain buyer, there is a catch!

A cheap price may also mean a greater compromise on the quality or lack of features and bad overall performance of the drone!

However, some drone models have managed to defy the odds by maintaining a more-than-decent quality despite their astonishingly affordable price tag. A good example is the Eachine 520S. But what makes this drone stand out from the crowd?

Let’s figure that with the following unbiased Eachine 520S review!

Eachine E520S at a Glance

From a distance, you’ll notice the striking resemblance the E520S bears to the DJI Mavic Air! Well, this is because it's a clone that was inspired by the design and build of the popular Air. That being said, the question begs; does it replicate what the pricier Mavic Air offers in terms of specs and performance?

Let us examine the features of the drone individually to answer this question!

The Eachine E520S comes with a flight time of around 16 minutes, which is pretty impressive for a drone that will cost a little more than $100. I know what you’re thinking… How does such a tiny thing pack so much juice? Well, the answer lies within the battery.

The drone is equipped with a 1200mAh modular battery, which is a newer and more efficient version of Lithium-Polymer batteries. This allows the battery to store the charge much longer than most drones in the same price range.

However, if you feel like that’s not enough playtime, you can get an extra battery to double the flight time. Even better, take advantage of the three-battery bundle the manufacturer offers which you can get for less than buying three separate batteries! 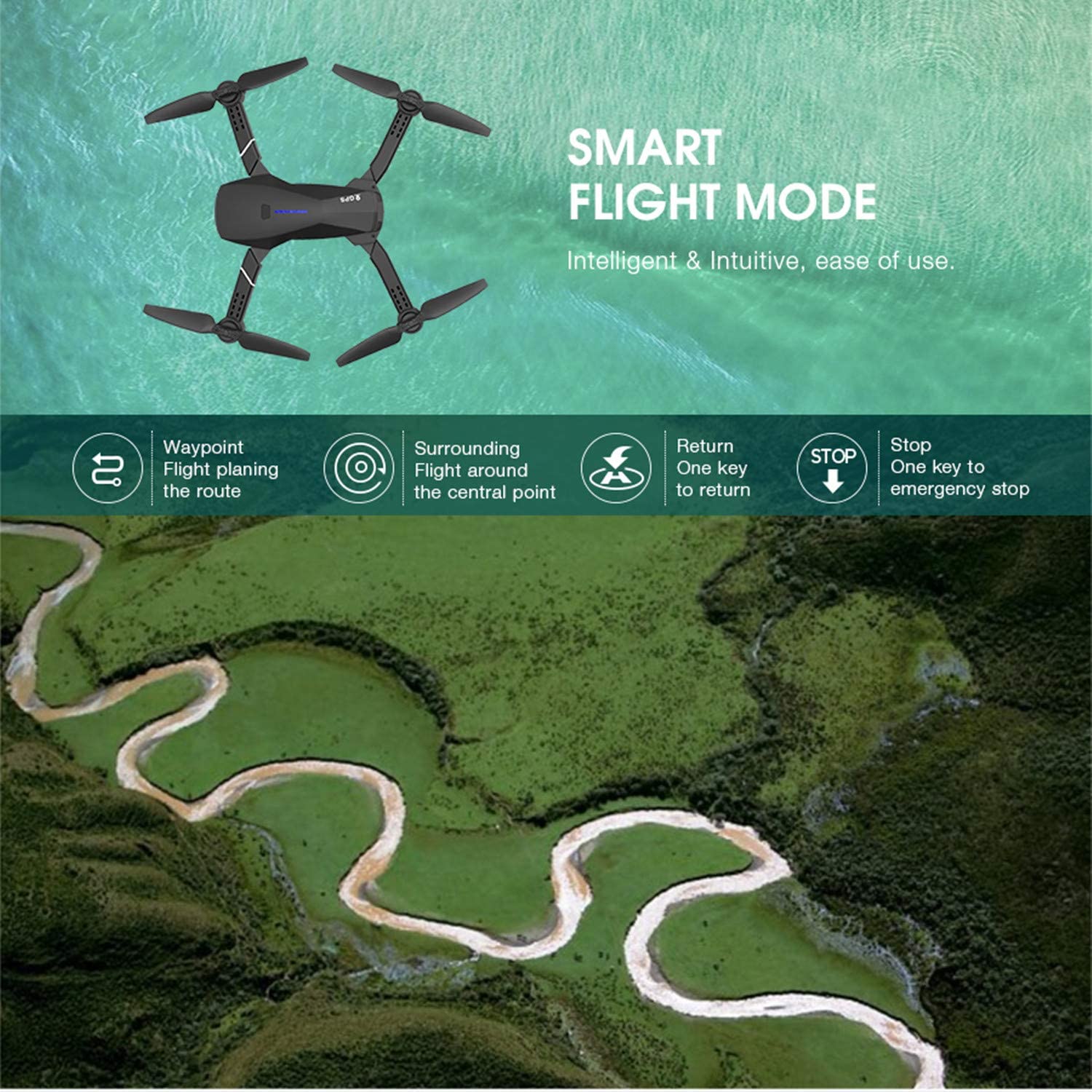 This drone can be piloted to a maximum remote distance of 300m; good enough for a rookie flier to learn the ropes comfortably. Thankfully, the integrated Return-to-Home function ensures that the E520S will come back to its point of takeoff in case of loss of signal or deteriorated battery level.

However, the range drops to 250m when using the FPV feature to control the drone. The package features a compact and ergonomic controller that fits snugly in your palms. Its build quality is also appealing, unlike the dull and clunky design you find on other cheap models.

You won’t get bored flying this drone ! The controller is also powered by 4 AAA batteries.

The camera is one of the most important features on a consumer drone, and you’ll be glad to know that the E520S doesn’t disappoint. The drone offers its best impression of the Mavic Air with a 4K camera, which is simply unheard of at this price.

Unfortunately, this can be a little misleading because the drone will only shoot 4K still images. For the video, you will have to settle for 1080p resolution, which you honestly can’t complain about. As expected, the camera delivers excellent photo and video capturing abilities. This is enhanced by the 120-degree field of view to ensure greater detail in individual shots. 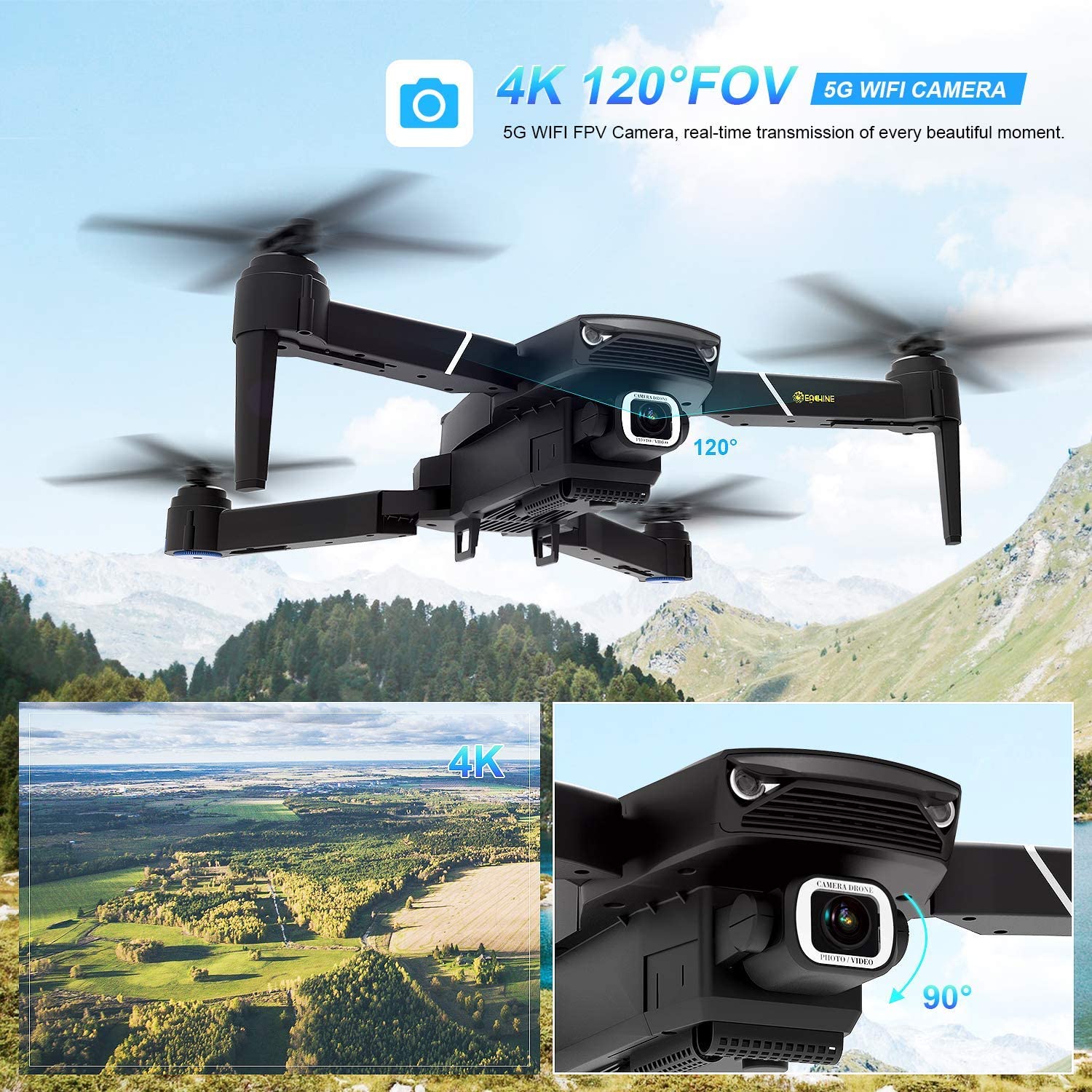 Although it’s not as effective as a 3-axis, the built-in 1-axis gimbal stabilizer does a great job reducing the jello in your footage. The lens can also rotate through 90 degrees to offer you different viewing angles. You can store the recorded footage directly onto your phone or a micro SD card. However, you’ll have to purchase the memory card separately.

Note,  that to utilize the full potential of the 4K mode, you’ll have to pair the camera with a high-speed class SD card. Furthermore, you can fly the drone via FPV for a more immersive experience. The drone utilizes a 5GHz signal to offer strong FPV footage to a maximum control distance of 250m.

Considering the quality of the camera on the Eachine E520S, it is easy to see why many consider it to be among the best cheap drones under $200 you can buy this year!

When it comes to mid-air performance, the E520S is no pushover! Despite its relatively minute frame, it performs pretty well in stable and even breezy conditions. It is generally easy to pilot, although you might experience some interference when using the FPV function.

Multiple GPS-enabled intelligent flight modes take the piloting experience to the next level.

The Return Home function ensures that you can never lose your gadget while the One-Key Takeoff/Landing and Headless modes make it easier for amateur enthusiasts to launch the quadcopter into the air. Meanwhile, the Follow Me and Orbit modes will come in handy when you want to record dramatic footage with the camera.

You also get additional intelligent modes in Altitude Hold, Smart track, Waypoint, which will impress the most experienced drone lovers. With three different speed modes on offer, you can customize the flight in line with your level of experience for a blunder-free session.

Where to begin?…there is just so much to like about the Eachine E520S! But let me start with the camera. Even though the 4K resolution is limited to still photos, the camera goes above and beyond the call of duty for a drone this cheap!

The flight time is quite surprising for a small drone thanks to the efficient lipo battery. It is long enough to offer you the amount of fun you desire.

The remote controller comes with an ergonomic design, which feels comfortable in your hands to ensure that you don’t get tired of continuously flying the E520S when you purchase the three-battery bundle.

It’s pretty easy to store and control this drone on the go due to its lightweight and compact build, as well as the conveniently collapsible design.

Finally, the Eachine E520S offers so much value for the money. When you consider all the top features on the drone, it’s hard to believe that it will only set you back 100 bucks and some change!

There are so many positives on the Eachine E520S that it’s easy enough to forget that there are negatives. Nonetheless, you’d be hard-pressed finding something that makes you frown about this drone.

Maybe I can point out the lack of an effective stabilizing feature when the drone is in the air. The 1-axis gimbal stabilizer available is simply a consolation and can easily undermine the capabilities of the 4K camera with shaky footage!

Another negative is that the camera does not come with a micro SD card, which forces you to incur extra costs in purchasing one separately.

If you’ve ever experienced the wonder of the DJI Mavic Air and dreamt about flying it but was held back by the cost, the Eachine E520S offers you a great opportunity to live the dream, albeit partly as highlighted in the review above.

This drone offers a commendable imitation of its pricier inspiration with a range of high-performance features. Despite its affordable price, the E520S has the profile to give advanced drone pilots something to enthuse about. Overall, it is a great bargain that I recommend to anyone with the slightest interest in drones.

It can be hard to outrightly point out the best budget drone in the market, but the Eachine E520S makes quite a compelling case! The quadcopter is lightweight, portable, and comes stacked with an array of high-quality specs. You get extensive playtime, a 4K camera, GPS-backed intelligent flight modes, stable aerial performance, just to mention a few.

If you’ve been longing to experience the world of drones and drone piloting, this quadcopter will let you make your first appearance with a bang!