In late 2021, DJI was hoping to keep the focus of attention on their Mavic 3 launch, while often overlooked competitor Autel announced their ultra-light drone featuring collision sensors. DJI’s then top-tier ultra-light drone, the Mini 2, didn’t have such technology – just a few painted vents that highlighted the relative feature weakness.

With that being said, while the Autel’s new drone Evo Nano Plus was impressive on a technical level, it was also the most expensive drone in the weight category by a mile.

It wasn’t long before DJI arrived with their own model for the new category we like to call a professional ultra-light: the Mini 3 Pro. 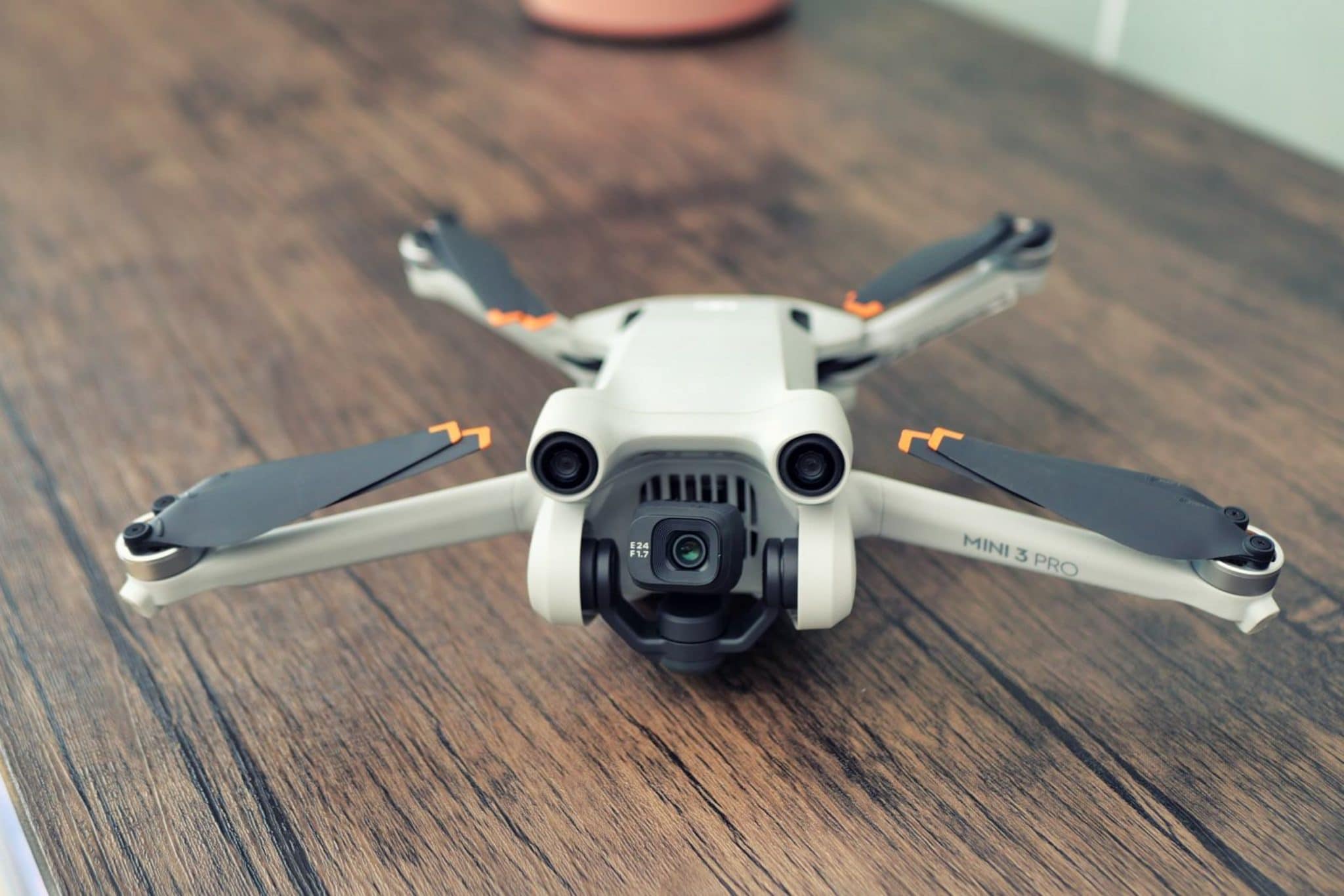 Until the Mini 3 Pro came out, some were expecting it to come at a similar price but with more features, but for now, at least, that isn’t the case - although the “Pro” tag indicates that the Mini 3 airframe is yet to arrive that will have a more modest camera.

Now, if you are looking to buy a professional ultra-light drone – to get the most features within the legal restrictions – you need to choose between these drones, and it’s not easy.

Autel has long gone with an eye-catching orange for their drone, giving a professional impression like high-vis jackets do.

On the other hand, the Nano is offered in three different color tones: a lighter grey with graphite trim, a chic grey plus yellow, or a pure red.

In general, rear-facing vision sensors are required as the drone reverses. The faster the drone goes backward, the closer to horizontal its rear vision sensors will see. Autel managed to tuck these sensors into hinges for the rear arms. 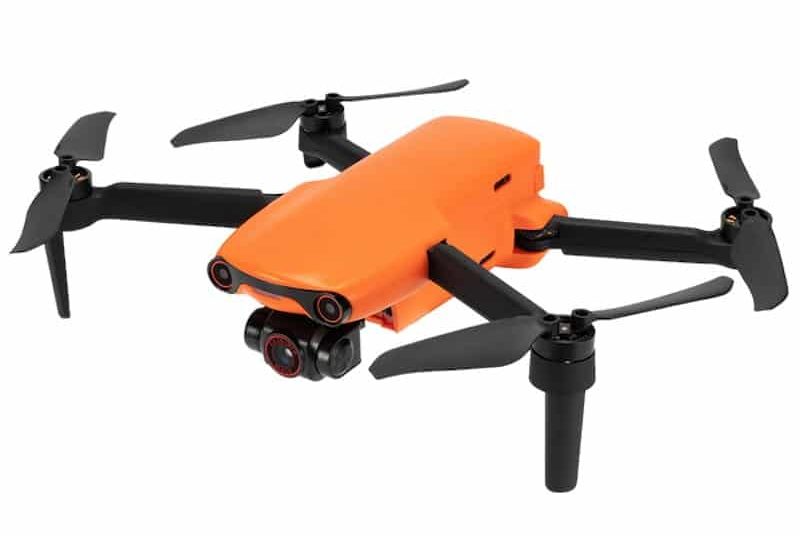 While both of these drones look quite different, the essential parts are the same – charging connector and battery accessed from the back, and camera gimbal placed at the front. When it comes to style preference it's not for us to judge. Also, both feel light but solid where it counts – particularly the hinges and arms.

One extra point for the Autel is that they include a gimbal cover and strap that protects the propellers by holding them close to the aircraft's main body, while DJI only includes a gimbal cover.

Another plus for Autel Evo Nano Plus is that the battery itself features the 4-LED test circuit, therefore you can check it even when it’s not in the aircraft. DJI Mini 3 Pro’s battery can only share this information when plugged into the drone.

While both Evo Nano Plus And Mini 3 Pro mount their cameras on a 3-axis gimbal, the Mini 3 Pro feature an important additional trick on the Roll axis - it can rotate the camera 90˚ to portrait mode.

That’s a significant bonus for social-focused creatives and it’s something the Evo Nano Plus can’t do. However, Evo Nano Plus does have a “Portrait” mode so you can capture stills or videos in this format but at the expense of resolution.

On top of that, the extra space around the Mini 3 Pro gimbal means it has more ability to compensate for roll pitch. The gimbal on the Evo Nano Plus is mounted on rubber dampers and protected from above. As a result, aggressive flying will push the gimbal to the edge more easily than on the DJI Mini 3 Pro.

DJI and Autel advertise their drones as being able to fly in up to Force 5 wind speed on the Beaufort scale, also known as a “Fresh Breeze.”

In practice, as the wind reached this kind of speed, the Mini 3 Pro looked much better in the air, while the Nano Evo Plus seemed to dance a bit more, which doesn’t inspire confidence. 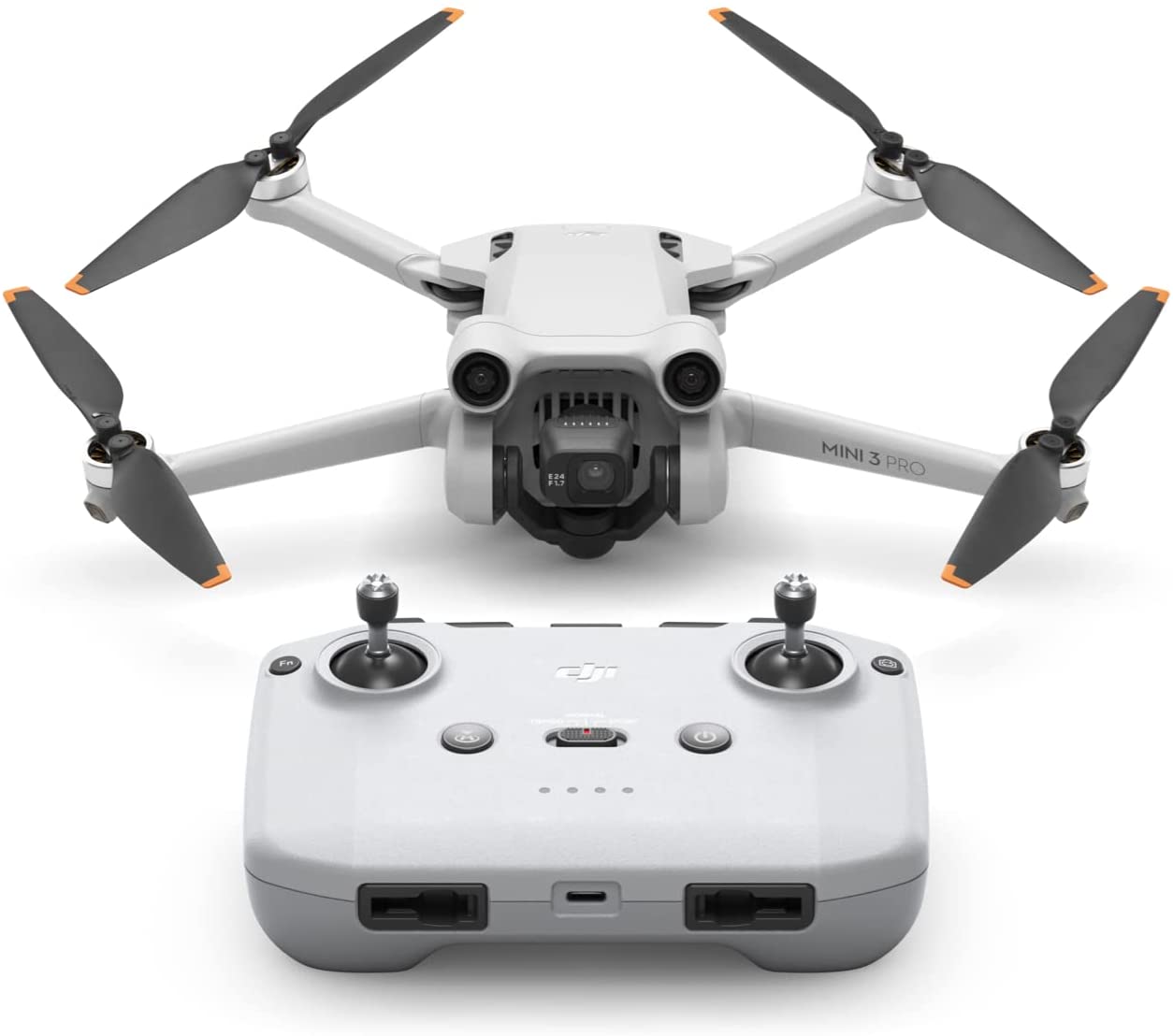 Both aircraft provide three different speed modes. Autel brands them Smooth, Standard, and Ludicrous while DJI calls them Cine, Normal, and Sport, but in practice, they are rather similar.

The lower flight mode is useful for controlling speed when capturing videos, while at the highest setting, the collision sensors aren’t guaranteed. A bonus point for DJI is a slider switch between speed settings on the remote, although the Autel remote features a user-definable key.

When collision sensors are enabled, both aircraft can avoid obstacles and it has to be said that both also do so relatively slowly than humans might, throttling back as the AI does its thing.

When it comes to communication technology, these aircraft have 12km and 10km ranges which is well over the legal limit you’ll generally be allowed to operate at.

The Evo Nano Plus has the edge when it comes to the live view video, which streams at 2.7K, which is better than the Mini 3 Pro’s 1080P.

The drone controller itself, however, is a more interesting battle. The Evo Nano Plus comes with Autel’s new and very comfortable to hold controller, while DJI offers both their standard RC-N1 - chunkier but effective controller – or a new one with a built-in 700-nit display.

If you’re mounting a smartphone, the Autel’s controller might look less sophisticated than the DJI’s, but it’s also lighter. On the flip side, DJI includes a handy holder for your leads and unscrewed control sticks in the RC-N1 controller, whereas Autel expects you not to lose the essential tiny components.

Also, DJI’s controller has a longer battery life, even if you connect it to your smartphone. However, this only factors if you’ve got more than six batteries with your drone, given their flight time.

With little to distinguish the megapixel count or the sensor size, both aircraft have stunning cameras. However, the Mini 3 Pro has a slight edge when it comes to aperture. If you look at the images, you can see sharper stills but more noise in the Mini 3 Pro shots when shooting at 48 or 50 Megapixels.

However, both brands seem to push users toward 12-megapixel shooting. On the Mini 3 Pro, the High Res is an entirely separate mode with certain features unavailable. In contrast, on the Evo Nano Plus, you can only capture JPEG images at 9192x6144 pixels.

DJI and Autel have different algorithmic approaches when it comes to visual difference. DJI appears to let more of the unprocessed information, resulting in more digital noise and softer edges. The green color definitely seems to get a boost and perhaps blue as well.

On the other hand, Autel seems to soften out much of that digital noise while simultaneously applying a stronger sharpening effect to edges. As a result, the Evo Nano Plus images look crisper when looked at a sensible size. However, a very close crop can appear unnatural, almost illustrated. 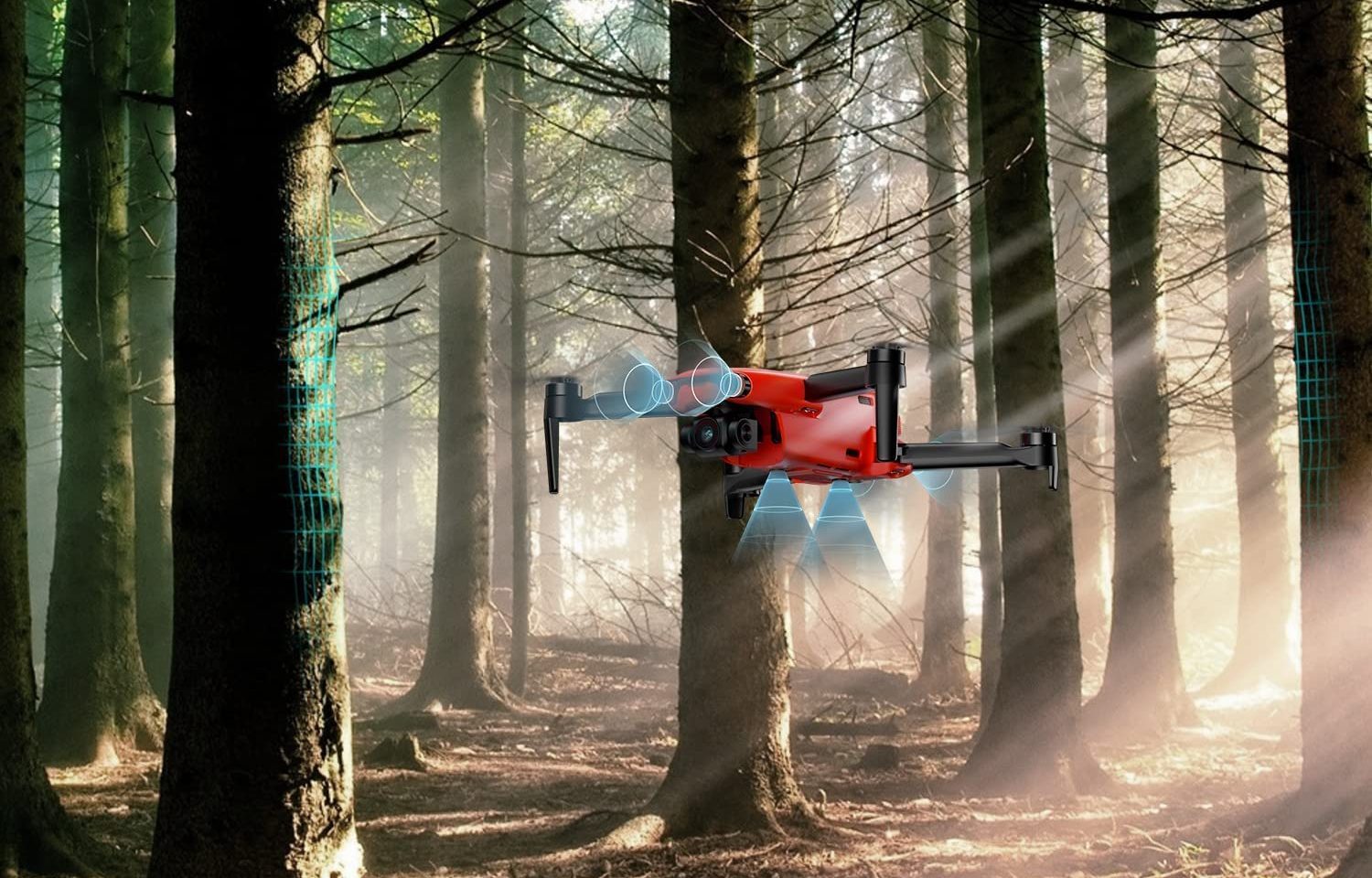 At the end of the day, it’s a matter of taste. Inevitably, both drones have slight evidence of perspective correction, although they handle it well.

Both drones have manual modes, though Autel’s shutter priority option feels more welcoming to photographers. Both also feature Bracketing and interval shooting, while the Evo Nano Plus additionally has an ‘HDR Imaging’ function. Both of them also have essentially the same panorama modes available.

Regarding video quality, DJI features a flat color profile, D-Cinelike, whereas the Autel has Log, so those who like to grade their videos will be satisfied either way. Sadly, neither drone can offer an unflattened preview image.

Just like the still photos, when you take a look at videos taken by each drone, you’ll notice they have slightly different approaches to processing. The Evo Nano Plus’s video appears sharper owing to a bit more aggressive software processing, which looks great when viewed normally, however, it doesn’t stand up to close inspection. Evo Nano Plus offers up to 16x digital zoom while the Mini 3 Pro only has 4x zoom, but arguably that’s just self-restraint.

Ask people who are seasoned drone pilots which one is better and you’ll find their answer typically leans toward the brand they’re more familiar with. Generally, more people are familiar with DJI, which impacts even some “impartial” evaluations regarding default color or sharpening and default control “feel.”

Autel’s photographic approach seemed more engaging - sharpening looks amazing, and when viewed at normal resolution, it looked ‘right.’ However, most photographers will want to process their photos, and DJI provides more features here with the high res .dng option.

In terms of video quality, not only does the Mini 3 Pro edge things due to having the option of 60fps, but it also feels more comfortable in the breeze. Equally, the broader gimbal movement means you can’t hit the limits like the Evo Nano Plus can.

Despite this being a very close battle, the slightly more reliable airframe, extra battery time, and the variety of controller options all add up and make the DJI Mini 3 Pro a winner, at least while the cost also slightly favors the Mini 3 Pro.

Last update on 2022-08-07 / Affiliate links / Images from Amazon Product Advertising API This article contains affiliate links which for which the owner of the site may receive a commision. A brief history of drones – Plus a sneak peek into the future!

read More
A brief history of drones – Plus a sneak peek into the future!

Best Drones For Vlogging This Year – What You Need To Know