FPV drone racing is the latest craze in the quadcopter industry; gaining new loyal followers by the day and proving to be just as popular as any other sport out there.

The thrill of watching these little machines race through the sky at neck-break speed while dodging obstacles with incomparable agility can easily get you hooked on the activity.

So, if you just discovered your love for drones, you might want to take it up a notch by getting into drone racing. But what is FPV drone racing? In this post, we tell all you need to know about this exciting new craze!

Drone racing is a new sport that involves small but very fast drones flying around a preset course littered with a range of obstacles. Participants try to maneuver their quads over, around, and through these hurdles, to beat their rivals to the finishing line.

Unlike motorsports and other types of racing, the course used for drone racing can be three-dimensional. The racers remain on land but have access to the view of the drone like they are inside the aircraft’s cockpit.

This is possible with the application of First Person View (FPV) technology, which provides you with real-time video footage of the drone to make for precise remote control of the vehicles. That is why the sport is referred to as FPV drone racing.

Drone racing started as an underground activity, with early races being held in empty parking garages and car parks.  It began in Germany in 2011 with a number of amateur pilots getting together for semi-organised races in Karlsruhe.

To this day, parking garages and car parks remain a favorite setting for drone racing enthusiasts.

However, the sport has grown to also include forests, possibly taking inspiration from speeder bike chase scenes from movies such as Star Wars: Return of the Jedi.

To become a drone racer, there are three basic pieces of equipment that you’ll need. These include an FPV-ready drone, a radio controller, as well as a compatible FPV headset. Extra requirements such as spare parts and backup accessories will come in handy when you need to replace any bits that get damaged or lost in the course of the race.

This is a common occurrence when the drones collide midair or when they run into obstacles. Ultimately, the aircraft, controller, and headset are the most fundamental components for drone racing.

The model and brand of components you decide to use is largely a matter of preference. If you’re a hobbyist drone enthusiast with relatively basic drone flying skills, you can get started with an introductory package that won’t cost you as much.

Once you hone your racing skills and master your beginner drone under $200, you can upgrade to a more technical piece of equipment. As far as the drone is concerned, you must choose whether to go with a Ready-to-fly (RTF) quad bought from the store or a DIY assembled drone.

However, you should note that piecing up together the drone on your own requires a great deal of technical know-how and dedication, not to mention that it can end up in mixed results. So, this is an option mostly reserved for experienced pilots with intimate knowledge of the functioning of their drones and how to modify them to their liking.

On the other hand, there are plenty of cheap RTF drones available on the market that come pre assembled and ready to race.

The reason behind drone racing’s sheer growth in the market lies in the technology required for you to participate. Almost all the parts needed are not only fairly cheap but also easy to access, which is a direct opposite to most types of motorsports.

Some of the elements you’ll need for a typical drone racing set include the quadcopter itself, a video transmitter, a video camera, remote controls, as well as a set of video goggles.

All these parts can readily be ordered from the internet and delivered to your doorstep within a day or two. A cheap set-up could cost you a couple of hundred dollars, and this will include a drone under $300.

Unlike F1 and other types of car racing, you can create your drone from the comfort of your home and sign up for a competition. This is an exciting prospect for many drone racing enthusiasts out there, especially those who prefer to stay within the confines of their homes.

What’s interesting is that you can even find a paper plane FPV drone! All you need to do is fold a paper plane (yes, the same way you did as a kid) then equip it with motors, autopilot, and a camera system.

Finally, you can use a smartphone in place of FPV goggles!

The fact that you don’t need a pilot to be onboard the aerial vehicles allows the drones to be very small. They only need to be big enough to carry a video camera, its battery, and a few other electronics. This is another aspect that makes it such a cheap sport.

Another positive aspect of drone racing is that it is not an overly hazardous sport to the participants. However, it involves some of the fastest drones out there, with some reaching speeds of up to 150km/hr. when racing outdoors.

The typical nature of a drone race course means the likelihood of colliding with pilots or fans watching is relatively low. Nevertheless, when racing your drones outside, you must operate within the country’s specific unmanned aircrafts regulations.

These will relatively differ from one country to another, so you must establish what the law of the land is before you decide to race your drone outdoors. The reason for such is to keep people out of the fast-moving aerial vehicle’s way, as well as to eliminate the risk of the drone flying into the path of regular aircrafts.

With more people getting into drone racing, regulators around the globe are grappling with how to control the emerging sport. When it comes to indoor drone racing, there are no regulations to worry about.

This is why most drone racing events are held around empty car parks, office buildings, and warehouses. 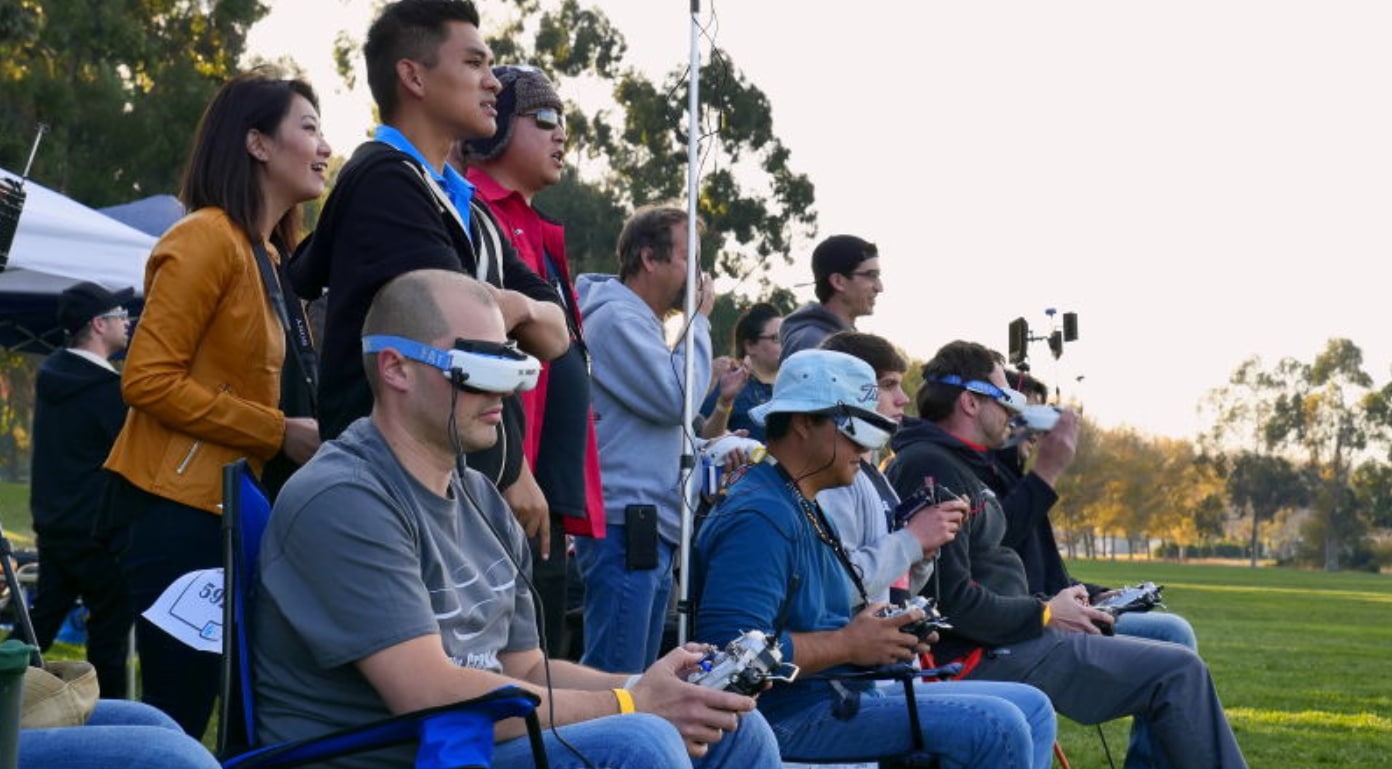 The fast and rapid growth of drone racing is clearly pointing to its potential to become a big-money sport. It was also inevitable that leagues would be put together and sponsorships attracted to form both regional and national championships.

This was evident from the advent of the Drone Racing League (DRL) in January 2016, which revealed that it would be running an FPV drone racing series at an international level. Just like modern F1 racing, viewers can follow the developments of the race via live video streaming.

There have also been other rival leagues to indicate the growing popularity of the sport. If you’re a drone racing enthusiast, this is an opportunity to grow your flying skills and invest in equipment that will put you in a position to compete in international events.

With prizes going up to $1 million in some competitions, who wouldn’t want to earn this kind of  money!

Overall, FPV drone racing is a sport that is quickly gaining traction among drone enthusiasts. It is not only an exciting pastime but also a way to earn a paycheck while doing something you love!!!